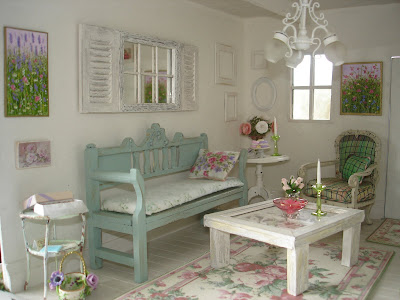 I have been meaning to make a mirror for the living room for ages....I wanted one that looks as though it has been made from an old window frame. Then the other day when I was lost in blog-land, I saw a wondeful photo here of a lovely full-sized one, complete with shutters, and got all inspired. The main thing holding me up has been getting hold of a piece of real mirror that was around about the right size. I've pulled apart makeup compacts (mirror was too big) and shopped at the $2 shop (mirrors were too small), and then I remembered I had another mirror lurking in the shadows. 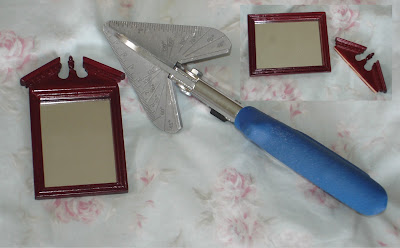 Now, no offence to anyone who has this mirror in their Victorian dollshouse, where it probably looks fantastic, but it doesn't suit my little shabby cottage at all, so.... 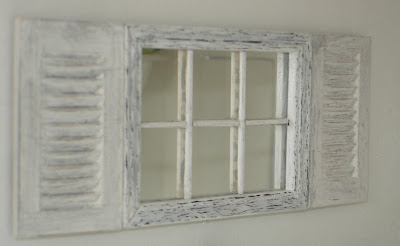 ...and a bit of paint, and glue and after the addition of a shutter that has been cut in half, here is my mirror and it looks just right in the living room. That wall needed something to brighten it up and I am really happy with it. It's not quite the same as the one in the photo but I thought that too much more embellishment in addition to the shutters would probably be a bit over the top.
Posted by Carolyn at 9:44 PM

Carolyn, your mirror looks fabulous!
And I wanted to thank you for your plate decorating tutorial. I hope to try it myself one day ;-)

It looks wonderful! Both mirrors are nice, but your adaptation is the right one for your house. :)

If you get a chance, can you pop over to my blog for some advice on easy cutters please. I am starting to wonder if I got a dud!

Fabulous Carolyn. Perfect in your house.

Just perfect, your mirror gave me an idea for my bedroom. Hope you don´t mind if I borrow it!

I just came back for another look :~) All your rooms look so real and so desirable!

What a very good idea! I love the result and it is perfect in your room.
Geneviève

wow , Carolyn , that is an amazing piece of work , couldn't believe it ,so real looking , your room looks so amazing too ,wow.

Carolyn, You are such a great artist! I love this mirror!! It came out so perfect and looks wonderful in your house!!!! Thank you for all of the pictures about how you made it! They are really wonderful!!!

It is absolutely fabulous!

It is just wonderful! I love it.

Perfect, it's absolutely at home in your mini living room. It's lovely and fresh. Rosanna

Very nice Carolyn, this room is so cosy:) I like the colors very much.

It turned out beautifully! =)

Your room looks wonderful and 'shabby' and you have done a great job with the mirror, I love shutters too and must use a couple in the shop!

I love the mirror makeover, it looks so much better. I really enjoy seeing how you transform items to better suit your decor for the dollhouse. I'm a big fan of shabby chic in my own home. Do you decorate your home in shabby chic as well?

What a great idea, done perfectly! Love your creativity! I love my easy cutter too! Would never have thought about cutting the mirror frame like you did.

Great job! I simply love it!

What a wonderful idea! This mirror looks absolutely great.
rapunzel

Omg... I love it. What a great idea!! I think it turned out beautifully.

it's very pretty and suits the room perfectly!