What I have been doing 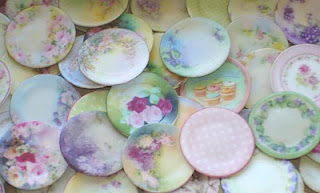 My poor abandoned blog has been sitting here, unloved and un-updated for such a long time!  I've been missing all my blog friends and, after a terrible year, during which it seemed as though everything went wrong, 2013 is looking much better, so it's time for an update.


I must admit I got quite distracted from miniatures last year, so I thought I would let you see some of last year's distractions.

First of all, we decided to get chickens.  They live on a chicken dome in our front garden for part of the year, and in a permanent chicken run in the back yard for the rest of the time.  On the left, you can see Bella (a blue orpington) who is definitely my favourite.  During the year we have lots of adventures with the chickens, including having a chick (just one chick from a clutch of five eggs, which just goes to illustrate the saying "never count your chickens before they hatch").  Mallow and her chick Marigold are pictured on the right.

The chickens were part of a new plan for our garden.  We dug up the front lawn, planted it all out in vege beds and have been growing as much of our food as possible this year. 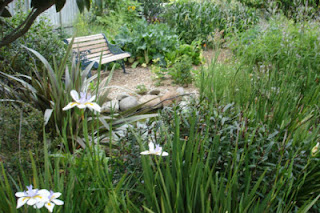 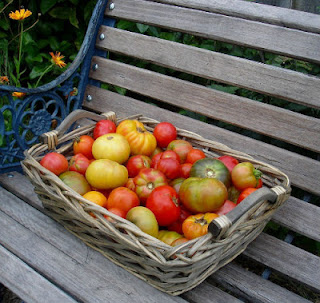 Hubby made me a lovely shabby-chic garden bench  and we've had a wonderful summer - here are some of last week's tomatoes....

....there will be some dollshouse miniatures in this blogpost.... 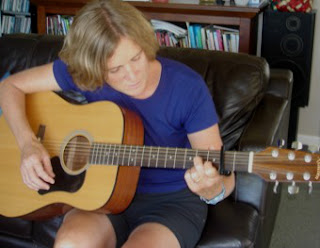 Another reason I haven't spent much time on miniatures is that I have been learning to play guitar.   I still have a long way to go and I'm too shy to play in front of anyone yet, but it's been a lot of fun learning and it just goes to show that you are never too old to start something.  I wish I had done this 25 years ago....I could have been quite good by now. 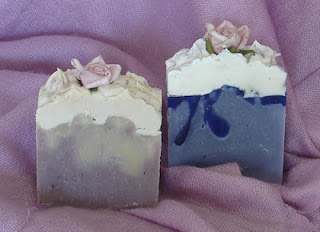 And finally, I also managed to get distracted by soapmaking.  I have had a lovely time learning how to make soap and am never short of a gift for family and friends now....haven't had to use any bought soap for ages either!  I have to admit I also got distracted by cheesemaking.  It's been a busy year. 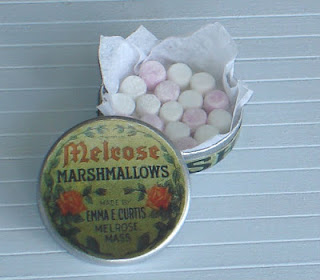 Something I made last year of which I was quite proud was this cute little tin of marshmallows.  I have made the tins before, but this time I made some tiny marshmallows in pink and white, made from polymer clay and dusted with miniature "icing sugar" - they were very cute and I enjoyed making them.

The chickens prompted a bit of a "chicken" focus for a while and I also made a cute little vintage sign, which has yet to find a home.... 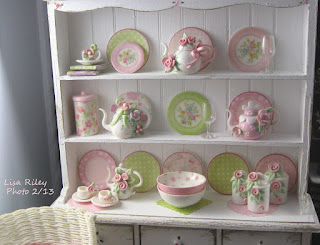 Here is a photo I am really proud to show you.  Lisa Riley took this photo and sent it to me, to show me the dresser she had arranged, including some plates she had bought from my Etsy store.  I asked her if I could use the photo on my blog and she kindly agreed.  If you would like to see more of her gorgeous work, you can check out her blog - Design Inspirations - it's so pretty!!  Thanks, Lisa, for getting me inspired again and all excited about making more little plates.

I was really touched, after having a really awful year, to receive a whole heap of emails and messages via Etsy asking about whether everything was ok, when I was going to start blogging again, and also when I was going to start selling miniature plates again.  It motivated me to get my act together, and I have made a new shop banner and restocked my Etsy store.  I'm all excited about making miniatures again, and now that the New Zealand summer is coming to an end (although it's still massively hot here and not a sign of any rain any time soon), I'll hopefully have some time to try out some of my new ideas! 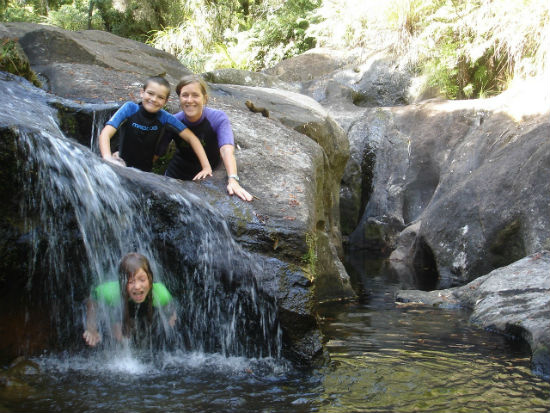 Thanks for reading this blogpost.  This is a photo taken yesterday - our family of four plus the dog went out for a tramp into the bush - we took our wetsuits and spent the day walking, climbing and swimming down one of the local rivers.....it was just gorgeous.  Here are Matthew and I posing for the camera, not realising that Ella was finding the water quite cold!!
Posted by Carolyn at 5:10 PM

Carolyn, it's so good to see you posting again! Love your veggie garden and very jealous of your lovely chooks. Wishing you all that's good in 2013.

If you judged only by photos, it would seem you have had a fantastically productive year and the break from the internet was good for you! I'm sorry to hear that all was not as perfect as it looks and hope that this year will improve. :-)

Bella is very pretty, but I have a soft spot for light sussex, so Mallow caught my attention.

Your marshmallows are amazing! I thought you were showing off a life size tin and couldn't believe my eyes when I saw the whole package was mini.

It's so nice to see you back.

Yay, how great to see you here again Carolyn!! Your chooks and garden are really special, their heirloom tomatoes look so delicious! Oh poor Ella, she's not really in the best spot poor thing - still I'm sure she's revelling in the adventure of it :)

The little tin and marshmallows is really great!

I was 'dressing' the French kitchen on Friday and put a small pile of your pretty plates, the small ones, on the shelf. It felt a bit wrong to be piling them up because it means that the cuteness of each of them can't be seen but then I decided it was okay because I know how lovely they are and others will just have to imagine :) There are still a couple of them, a some of the larger ones, on the draining board for all to see. I don't know if I'll accomplish it or not but I'm going to try to get the whole place finished in time for the Sydney miniatures fair. If the importance of it is overtaken by other things then there's always 2014 ;)

The chickens and your garden look amazing. Learning to play gitare is so much fun! hope you enjoy it! gr. AM

I have had a busy year too! Glad things are looking up in 2013, glad to see you back! Blessings!

I'm glad to hear from you.
Your mini items are wonderful, especially the little tin.
Bye Faby

Hi Carolyn! It's so nice to read one of your blog posts. I really like the way you write and you always have lots of nice photos. I was getting a bit worried about you so I'm so glad to know that you are okay! I have been wanting to try making some mini plates the way you told us about in your tutorial and I bought the paper but then realised I had no idea where to get little plain plates like that in NZ! Where is the best place to get them? I LOVE your little marshmallows! They look so real they make my mouth water! And your garden, chooks, soaps guitar, and tramping adventures all look great. It's cool to know about the other things that make a person who they are. xo Amy

It's nice to see you back blogging again and showing us your wonderful plats. I too love the little marshmallow tin and hope it appears on Etsy at some point!

Sorry to hear that things haven't been that great for you but it can't last forever and hopefully you've seen the back of all that now.

Carolyn it's great to 'see' you again! I hope that 2013 does carry out its promise of being a much better year for you and that your mini inspiration continues :) Love what you've been doing both mini and RL. The chooks look fun and your vegie garden is wonderful. Autumn is around the corner here 'down under' and soon it will be easier to spend time indoors enjoying creating mini delights.
Hugs Sandie

My dear, I am also happy to hear from you, and know that you're okay ...
Life often takes us away from our usual pastimes, so nothing strange that you took a break from miniatures and you will be given to gardening and farming of chickens :-)
But know that your plates are displayed in so many doll houses around the world and they make many people happy (including me!), So welcome back with new miniature inspiration :-)
Lovely, lovely hugs
Flora